A Cozy Cabin with a Rustic Feel

This outdoorsy Tennessee home – designed to look like it was built in the 1850s – might be a cozy cabin, but it lives large. 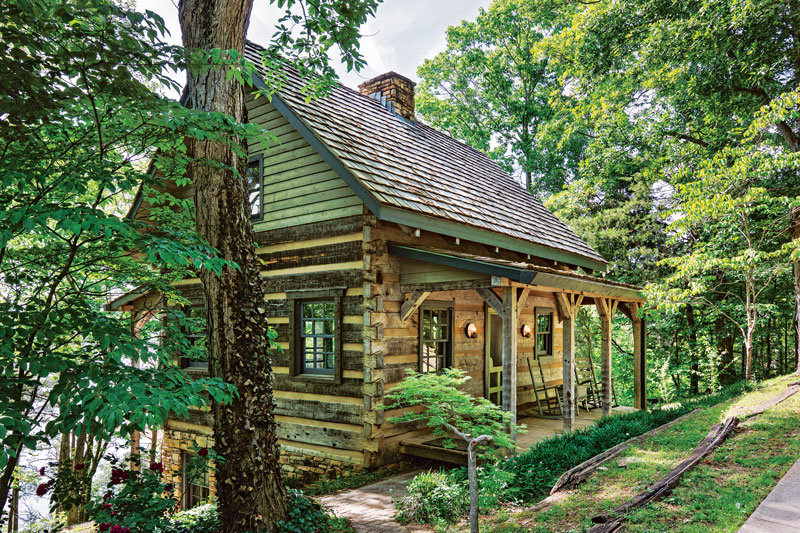 Why would someone who builds cabins for a living want to shoehorn his own large family into a log cabin with only an 18×24 footprint? 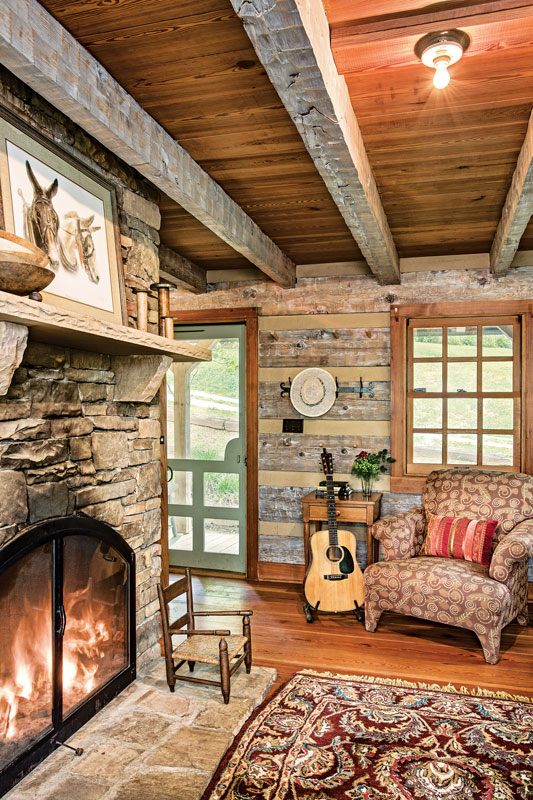 In Randy Giles case, chalk it up to stubbornness. “It was an exercise in trying to build small and live small,” says Giles, owner of Hearthstone Homes. “That was important to me. I wanted to say, ‘Yes, I can build a livable cabin that is this small.’ ”

And for 15 years, the Giles family made it work, even as the family grew to include the first four of their five children.

Of course, it didn’t hurt that the cabin sits on 80 acres beside Douglas Lake in Tennessee. The Giles children grew up on the water and learned to boat at an early age.

Sometimes they spent the night out on the lake in the boat. They camped out in three seasons. A small house creates more motivation for everyone in the family to pursue outdoor activities, Giles found.

“I don’t know whether living in a log house makes you feel outdoorsy or whether people who enjoy the outdoors are drawn to cabin living,” Giles says. “The kids weren’t intent on sleeping in a bed every night.”

Because of the small kitchen, the family ate many meals out on the porch, something they relished but might not have done if they’d lived in a larger house. 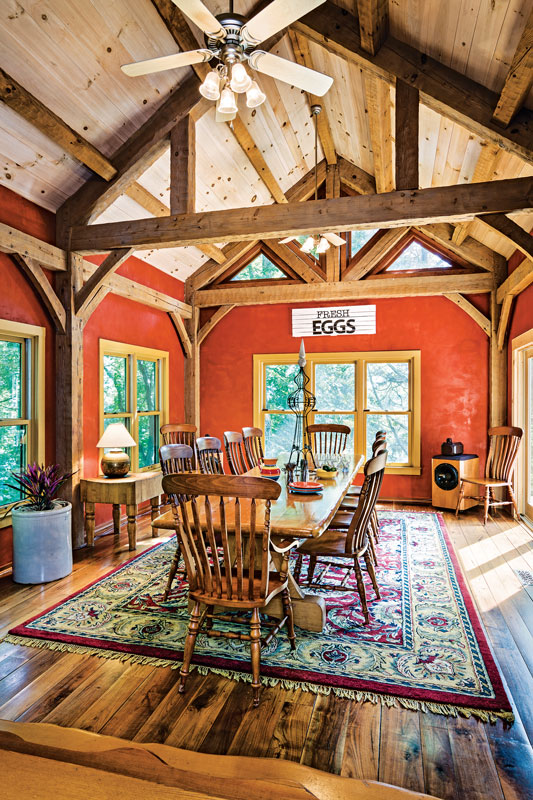 Giles looks back fondly at the good times the family shared in the cabin. In fact, he and his oldest son both write songs, and Giles said many of his songs originate from the memories they have of life in the cabin on the lake.

The Genesis of the dream

Let’s back this story up to the beginning.

Giles grew up in Pennsylvania, and after four years at Purdue University on the plains of Indiana, he hankered to return to gentle tree-covered mountains.

In the early 1980s, he came across 80 acres of land overlooking Douglas Lake near Dandridge, Tenn., at a price he could afford. He saved the prime building spot for the dream house he wanted to build someday.

To site the starter home that he would build immediately, he scouted out a site on the cusp of where the land dropped off in a steep descent to the lake.

There, in 1985, he constructed his three-story, 1,200-square-foot log cabin on an 18×24 footprint. Giles added a bedroom-and-bath suite in an enclosed loft above the main living area.

And because he built the cabin on a steep slope, the topography allowed for a walkout basement with windows on three sides. Giles built another bedroom-and-bath suite there. Giles and his wife, Toni, had the top floor, and the children slept in the lower level. 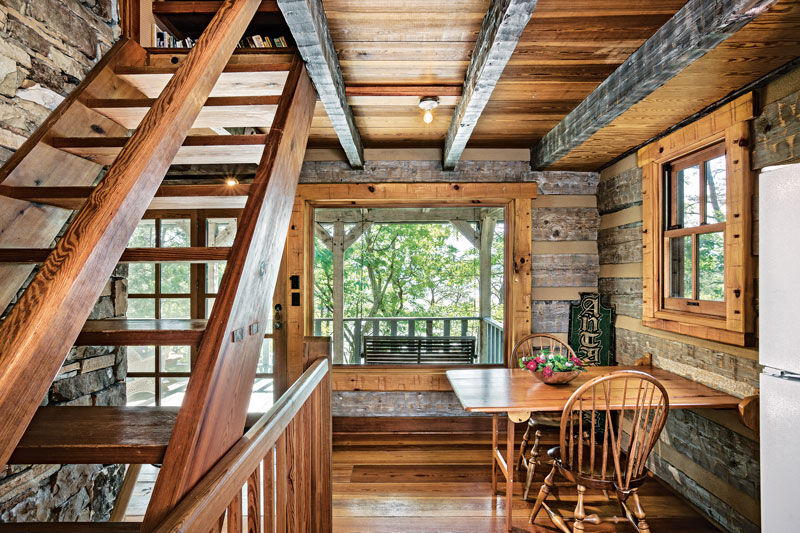 They gathered in the middle, in the main level that encompassed a small kitchen and dining area and the family living space and fireplace with an interior chimney. 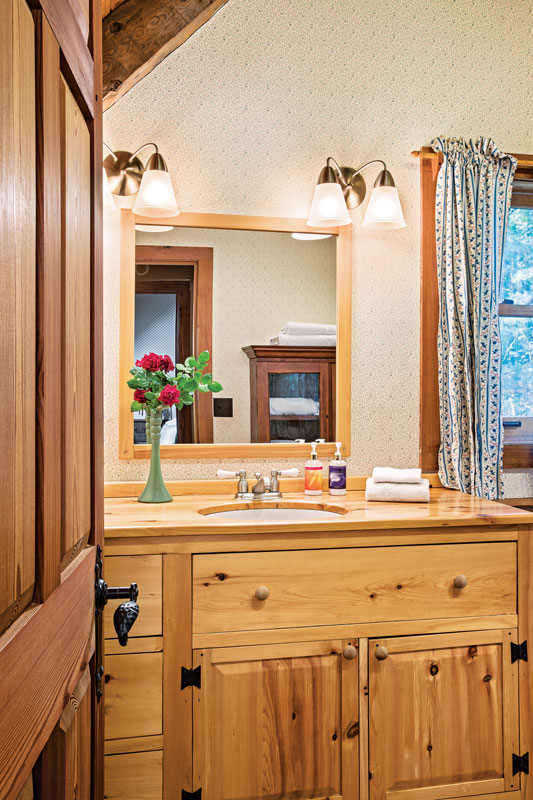 Historical connections matter to Giles. He wanted the cabin to look as if it had been on the site for 150 years, though it could not be an exact replica.

People were smaller generations ago, so a cabin from that period would have smaller doors, and heating was primitive, resulting in the need for smaller windows.

But he paid attention to the height of the cabin, the pitch of the roof, the construction materials, and of course, the porches.

Importance of the porch

“The smaller the house, the more important the porches are,” he says. “Porches create extra living space.”

Every cabin built in the 1800s had at least a porch out front. With an economy of interior space, outdoor living gained importance, and in the summer, a shaded porch in the path of a breeze was a comfortable place to work and rest.

The front porch in Giles’ cabin is only 6 feet wide, authentic to cabins at the time when pioneers were frugal with space and timber.

Giles added a back porch to take advantage of the lake view and the spectacular sunsets. The back porch accommodates a generous dining table, and the family often ate outdoors or used the space for entertaining. 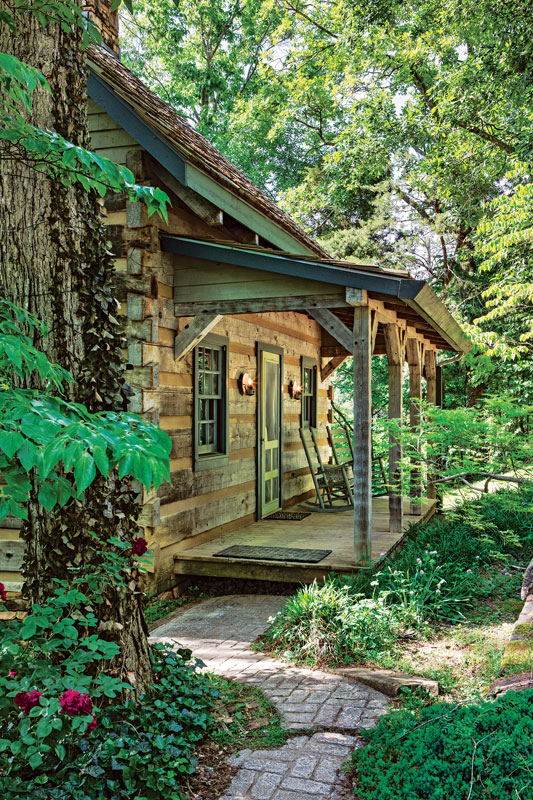 About eight years ago, Giles strayed slightly from strict adherence to reproduction by replacing two small windows that opened onto the back porch with a large section of fixed glass. He cut out some of the logs and reframed the section in timber.

Now the view across the lake welcomes people as soon as they walk through the front door. The retrofit makes the house feel so much bigger, he adds.

Having built so many cabins for customers over the years, Giles has observed a trend toward the eclectic. When he began building in the 1970s, his customers valued authenticity more than anything.

Their décor stemmed from a flintlock rifle hung over the fireplace. But today, cabin designs are more eclectic. People may want the front of the cabin to look like a traditional old log home, but they take greater design liberties with the back of the house, using more glass to make the most of outdoor vistas and allowing more sunshine to brighten the cabin.

Giles experimented with placing the fireplace in the middle of the room, rather than saving space by relegating it to an outside wall. An outside chimney would have allowed more living space but would have lost some heat to the outdoors. 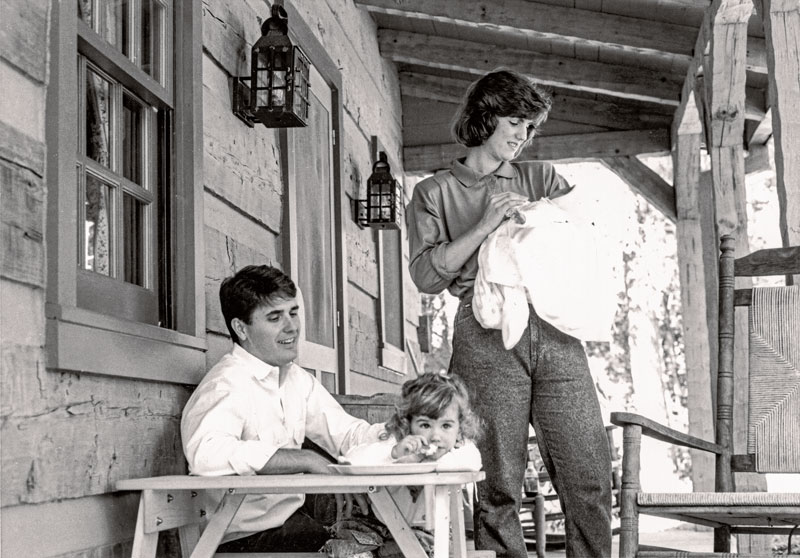 The small cabin worked for Randy and Toni Giles even when their family grew from four to six.

He challenged himself by installing a modular fireplace with an indoor chimney that served as a masonry radiator, capturing heat as the smoke wended its way out the roof.

“The technology reflected a centuries-old technique used in Northern Europe and Northern Asia of sending the smoke out on a circuitous route to extract heat before it left the house,” Giles says. 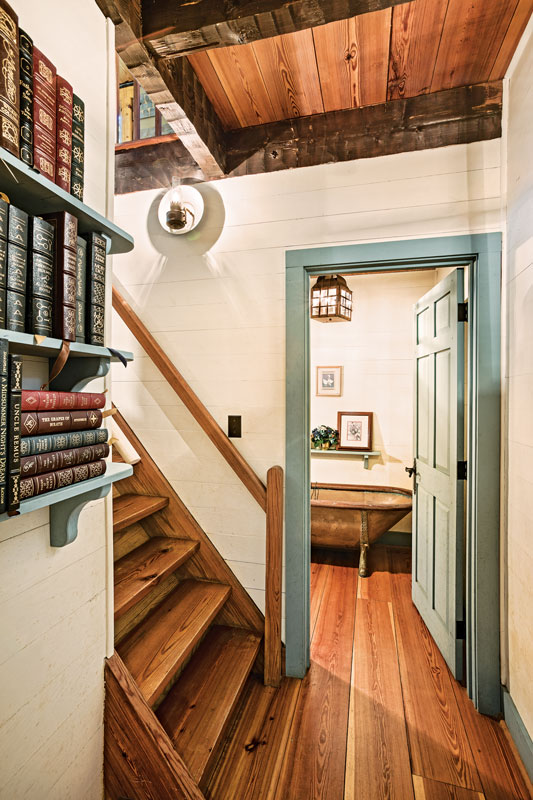 Quality materials in a small cabin

What Giles sacrificed in space, he made up for in quality of materials. Because he had less square footage, he could spend more on antique heart pine, and he used it liberally throughout the cabin.

The floors, stairs, cabinetry, and door came from heart pine harvested from deconstructed homes from generations ago.

“Heart pine is crazy expensive,” he says. “But we only had 400 square feet. Living small gave us the opportunity for luxuries we couldn’t have afforded otherwise.”

Speaking as a builder, Giles cautions homebuyers to rethink conventional notions of what a house should cost on a per-square-foot basis. A small house has all of the expensive, fixed-cost spaces – a kitchen and baths – and fewer inexpensive, discretionary spaces, like hallways and large rooms, to offset the cost-per-square-foot price.

Living as a family in a compact space yielded some unexpected benefits: Everyone felt less inclined to buy more things, and more motivated to keep the place tidied up.

“A small house has built-in brakes on clutter,” Giles says. “Where are you going to walk if you have stuff everywhere?”

The cabin’s efficient design enabled a lot of living in a small package. The Giles family lived in the compact cabin for 15 years before Giles built a larger home on the land’s premier site. Looking back, Giles is satisfied that his exercise in living small succeeded.

“The small cabin worked amazingly well for an amazingly long time,” he says. “A small house is more livable than you might think.”